Why it’s Okay to Say No to Yourself 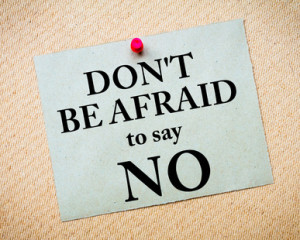 As adults living in the free world, we somehow have gotten the idea that we should never have to say ‘no’ to ourselves.

We believe we shouldn’t have to deny ourselves anything.

Anything to eat. To buy. To do.

Even if doing these things hurt us in the long run.

In the moment of choice, we mistakenly think that we deserve to have whatever we want.

We tell ourselves that we will feel deprived if we say no. To anything.

And so we create a life of giving in to whatever we desire in the moment. We honor all of our urges, cravings and wants.

When we do this, we create the equivalent of a spoiled brat. And that spoiled brat is us.

We know that giving a child whatever she wants, whenever she wants it, isn’t helpful to her in the long term.

But sometimes we want to avoid conflict and so we cave. We give in.

But if we are responsible adults, sometimes we need to face the discomfort of being the tough parent and saying ‘no’.

This is exactly what we need to do for ourselves. Yes, life is abundant and there’s a lot to tempt us. Yes, we should embrace all the choices in front of us and accept many of the gifts we are offered.

But if we say yes all the time to whatever we want, when we want it, we aren’t doing ourselves a favor.

We are creating a future filled with results we may not want. And an adult version of a spoiled child.

When we say no to ourselves, we say yes to possibilities.

When we say no to eating something just because it looks good when we’re not hungry, we are saying yes to listening to our body.

When we say no to following an urge to binge, we are saying yes to a much higher version of ourselves, who is free from the chains of binge eating.

When we say no to overdrinking and staying up too late, we say yes to a body that is cared for and ready for all that life has to offer.

What do you want to say no to… that will ultimately be a true yes for you?

Do NOT follow this link or you will be banned from the site!